rentrez provides functions that work with the NCBI Eutils API to search, download data from, and otherwise interact with NCBI databases.

rentrez is on CRAN, so you can get the latest stable release with install.packages("rentrez"). This repository will sometimes be a little ahead of the CRAN version, if you want the latest (and possibly greatest) version you can install the current github version using Hadley Wickham’s devtools.

Each of the functions exported by rentrez is documented, and this README and the package vignette provide examples of how to use the functions together as part of a workflow. The API itself is well-documented. Be sure to read the official documentation to get the most out of API. In particular, be aware of the NCBI’s usage policies and try to limit very large requests to off peak (USA) times (rentrez takes care of limiting the number of requests per second, and setting the appropriate entrez tool name in each request).

Hopefully this README, and the package’s vignette and in-line documentation, provide you with enough information to get started with rentrez. If you need more help, or if you discover a bug in rentrez please let us know, either through one of the contact methods described here, or by filing an issue

In many cases, doing something interesting with EUtils will take multiple calls. Here are a few examples of how the functions work together (check out the package vignette for others).

Getting data from that great paper you’ve just read

Let’s say I’ve just read a paper on the evolution of Hox genes, Di-Poi et al. (2010), and I want to get the data required to replicate their results. First, I need the unique ID for this paper in pubmed (the PMID). Unfortunately, many journals don’t give PMIDS for their papers, but we can use entrez_search to find the paper using the doi field:

Now, what sorts of data are available from other NCBI database for this paper?

In this case all the data is in the links element:

Each of the character vectors in this object contain unique IDs for records in the named databases. These functions try to make the most useful bits of the returned files available to users, but they also return the original file in case you want to dive into the XML yourself.

In this case we’ll get the protein sequences as fasta files, using ’ entrez_fetch:

I like spiders. So let’s say I want to learn a little more about New Zealand’s endemic “black widow” the katipo. Specifically, in the past the katipo has been split into two species, can we make a phylogeny to test this idea?

The first step here is to use the function entrez_search to find datasets that include katipo sequences. The popset database has sequences arising from phylogenetic or population-level studies, so let’s start there.

In this search count is the total number of hits returned for the search term. We can use entrez_summary to learn a little about these datasets. rentrez will parse this xml into a list of esummary records, with each list entry corresponding to one of the IDs it is passed. In this case we get six records, and we see what each one contains like so:

An we can extract specific elements from list of summary records with extract_from_esummary:

The “fetched” results are fasta formatted characters, which can be written to disk easily:

Once you’ve got the sequences you can do what you want with them, but I wanted a phylogeny and we can do that entirly within R. To get a nice tree with legible tip labels I’m gong to use stringr to extract just the species names and ape to built and root and neighbor joining tree: 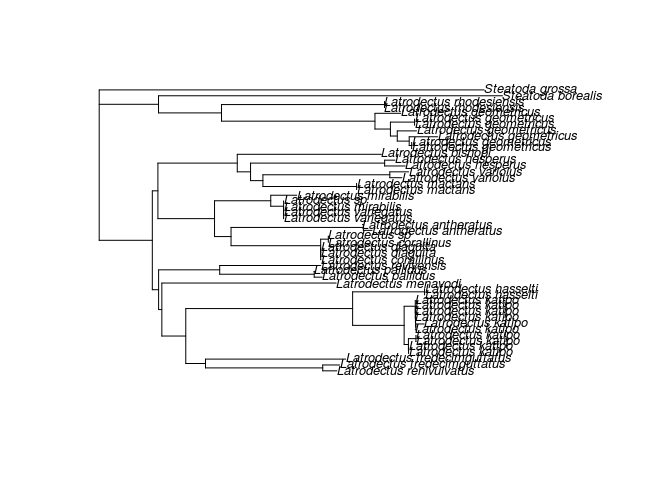 The NCBI provides search history features, which can be useful for dealing with large lists of IDs or repeated searches.

As an example, imagine you wanted to learn something about all of the SNPs in the non-recombing portion of the Y chromsome in humans. You could first find these SNPs using entrez_search, using the “CHR” (chromosome) and “CPOS” (position in chromosome) to specify the region of interest. (The syntax for these search terms is described in the vignette and the documentation for entrez_search):

When I wrote this that was a little over 200 000 SNPs. It’s probably not a good idea to set retmax to 200 000 and just download all of those identifiers. Instead, we could store this list of IDs on the NCBI’s server and refer to them in later calles to functions like entrez_link and entrez_fetch that accept a web history object.

As you can see, the result of the search now includes a web_history object. We can use that object to refer to these IDs in later calls. Heree we will just fetch complete records of the first 5 SNPs.

The records come to us as parsed XML objects, which you could futher process with the XML library or write to disk for later use.

Getting information about NCBI databases

Most of the examples above required some background information about what databases NCBI has to offer, and how they can be searched. rentrez provides a set of functions with names starting entrez_db that help you to discover this information in an interactive session.

First up, entrez_dbs() gives you a list of database names

Some of the names are a little opaque, so you can get some more descriptive information about each with entrez_db_summary()

entrez_db_searchable() lets you discover the fields available for search terms for a given database. You get back a named-list, with names are fields. Each element has additional information about each named search field (you can also use as.data.frame to create a dataframe, with one search-field per row):

Finally, entrez_db_links takes a database name, and returns a list of other NCBI databases which might contain linked-records.

This is one is a little more trivial, but you can also use entrez to search pubmed and the EUtils API allows you to limit searches by the year in which the paper was published. That gives is a chance to find the trendiest -omics going around (this has quite a lot of repeated searching, so it you want to run your own version be sure to do it in off peak times).

Let’s start by making a function that finds the number of records matching a given search term for each of several years (using the mindate and maxdate terms from the Eutils API):

With that we can fetch the data for each term and, by searching with no term, find the total number of papers published in each year:

That’s the data, let’s plot it:

Giving us… well this: 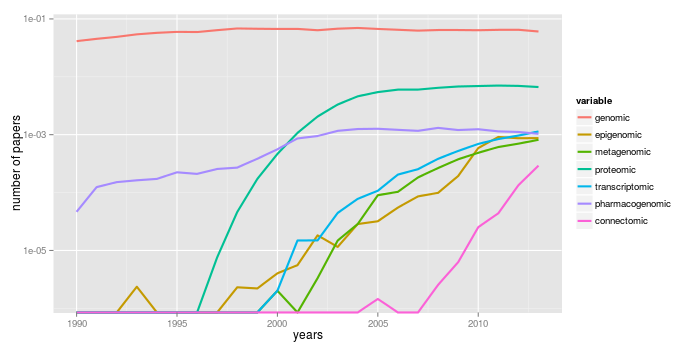 This package is part of a richer suite called fulltext, along with several other packages, that provides the ability to search for and retrieve full text of open access scholarly articles.