Data analysis can be slow. A round of scientific computation can take several minutes, hours, or even days to complete. After it finishes, if you update your code or data, your hard-earned results may no longer be valid. How much of that valuable output can you keep, and how much do you need to update? How much runtime must you endure all over again?

For projects in R, the drake package can help. It analyzes your workflow, skips steps with up-to-date results, and orchestrates the rest with optional distributed computing. At the end, drake provides evidence that your results match the underlying code and data, which increases your ability to trust your research.

Visit the first page of the manual to watch a 6-minute introduction. 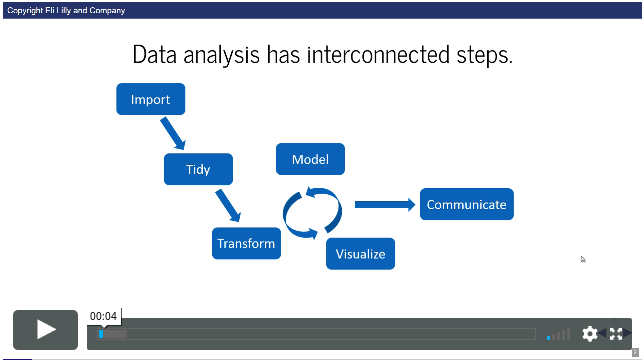 The rOpenSci Community Call from 2019-09-24 is a much longer presentation on drake (20 min talk, 35 min Q\&A). Visit the call’s page for links to additional resources, and chime in here to propose and vote for ideas for new Community Call topics and speakers. 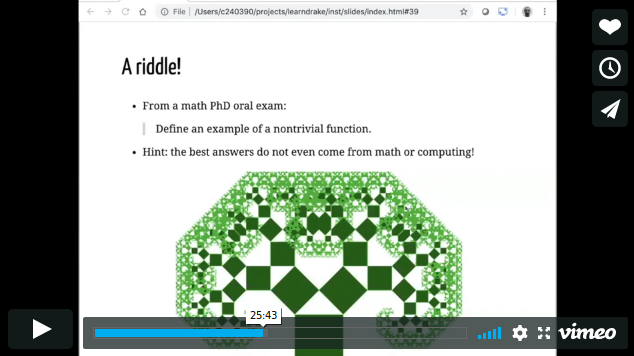 What gets done stays done.

Too many data science projects follow a Sisyphean loop:

For projects with long runtimes, people tend to get stuck.

But with drake, you can automatically

To set up a project, load your packages,

and plan what you are going to do.

So far, we have just been setting the stage. Use make() to do the real work. Targets are built in the correct order regardless of the row order of plan.

Except for files like report.html, your output is stored in a hidden .drake/ folder. Reading it back is easy.

You may look back on your work and see room for improvement, but it’s all good! The whole point of drake is to help you go back and change things quickly and painlessly. For example, we forgot to give our histogram a bin width.

So let’s fix the plotting function.

drake knows which results are affected.

The next make() just builds hist and report.html. No point in wasting time on the data or model.

The R community emphasizes reproducibility. Traditional themes include scientific replicability, literate programming with knitr, and version control with git. But internal consistency is important too. Reproducibility carries the promise that your output matches the code and data you say you used. With the exception of non-default triggers and hasty mode, drake strives to keep this promise.

Suppose you are reviewing someone else’s data analysis project for reproducibility. You scrutinize it carefully, checking that the datasets are available and the documentation is thorough. But could you re-create the results without the help of the original author? With drake, it is quick and easy to find out.

With everything already up to date, you have tangible evidence of reproducibility. Even though you did not re-create the results, you know the results are re-creatable. They faithfully show what the code is producing. Given the right package environment and system configuration, you have everything you need to reproduce all the output by yourself.

When it comes time to actually rerun the entire project, you have much more confidence. Starting over from scratch is trivially easy.

Select specialized data formats to increase speed and reduce memory consumption. In version 7.5.2.9000 and above, the available formats are “fst” for data frames (example below) and “keras” for Keras models (example here).

As of version 7.5.2, drake tracks the history and provenance of your targets: what you built, when you built it, how you built it, the arguments you used in your function calls, and how to get the data back. (Disable with make(history = FALSE))

Let’s use the history to recover the oldest histogram.

Remember how we made that change to our histogram? What if we want to change it back? If we revert create_plot(), make(plan, recover = TRUE) restores the original plot.

drake’s data recovery feature is another way to avoid rerunning commands. It is useful if:

In version 7.5.2 and above, make(recover = TRUE) can salvage the values of old targets. Before building a target, drake checks if you have ever built something else with the same command, dependencies, seed, etc. that you have right now. If appropriate, drake assigns the old value to the new target instead of rerunning the command.

You can use recovery to rename a target. The trick is to supply the random number generator seed that drake used with the old target name. Also, renaming a target unavoidably invalidates downstream targets.

With even more evidence and confidence, you can invest the time to independently replicate the original code base if necessary. Up until this point, you relied on basic drake functions such as make(), so you may not have needed to peek at any substantive author-defined code in advance. In that case, you can stay usefully ignorant as you reimplement the original author’s methodology. In other words, drake could potentially improve the integrity of independent replication.

Ideally, independent observers should be able to read your code and understand it. drake helps in several ways.

Scale up and out.

Not every project can complete in a single R session on your laptop. Some projects need more speed or computing power. Some require a few local processor cores, and some need large high-performance computing systems. But parallel computing is hard. Your tables and figures depend on your analysis results, and your analyses depend on your datasets, so some tasks must finish before others even begin. drake knows what to do. Parallelism is implicit and automatic. See the high-performance computing guide for all the details.

drake and Docker are compatible and complementary. Here are some examples that run drake inside a Docker image.

Alternatively, it is possible to run drake outside Docker and use the future package to send targets to a Docker image. drake’s Docker-psock example demonstrates how. Download the code with drake_example("Docker-psock").

You can choose among different versions of drake. The CRAN release often lags behind the online manual but may have fewer bugs.

The reference section lists all the available functions. Here are the most important ones.

The following resources document many known issues and challenges.

If you are still having trouble, please submit a new issue with a bug report or feature request, along with a minimal reproducible example where appropriate.

The GitHub issue tracker is mainly intended for bug reports and feature requests. While questions about usage etc. are also highly encouraged, you may alternatively wish to post to Stack Overflow and use the drake-r-package tag.

Development is a community effort, and we encourage participation. Please read CONTRIBUTING.md for details.

drake enhances reproducibility and high-performance computing, but not in all respects. Literate programming, local library managers, containerization, and strict session managers offer more robust solutions in their respective domains. And for the problems drake does solve, it stands on the shoulders of the giants that came before.

The original idea of a time-saving reproducible build system extends back at least as far as GNU Make, which still aids the work of data scientists as well as the original user base of complied language programmers. In fact, the name “drake” stands for “Data Frames in R for Make”. Make is used widely in reproducible research. Below are some examples from Karl Broman’s website.

Whereas GNU Make is language-agnostic, drake is fundamentally designed for R.

remake itself is no longer maintained, but its founding design goals and principles live on through drake. In fact, drake is a direct reimagining of remake with enhanced scalability, reproducibility, high-performance computing, visualization, and documentation.

Factual’s Drake is similar in concept, but the development effort is completely unrelated to the drake R package.

There are countless other successful pipeline toolkits. The drake package distinguishes itself with its R-focused approach, Tidyverse-friendly interface, and a thorough selection of parallel computing technologies and scheduling algorithms.

Memoization is the strategic caching of the return values of functions. It is a lightweight approach to the core problem that drake and other pipeline tools are trying to solve. Every time a memoized function is called with a new set of arguments, the return value is saved for future use. Later, whenever the same function is called with the same arguments, the previous return value is salvaged, and the function call is skipped to save time. The memoise package is the primary implementation of memoization in R.

Memoization saves time for small projects, but it arguably does not go far enough for large reproducible pipelines. In reality, the return value of a function depends not only on the function body and the arguments, but also on any nested functions and global variables, the dependencies of those dependencies, and so on upstream. drake tracks this deeper context, while memoise does not.

drake and knitr are symbiotic. drake’s job is to manage large computation and orchestrate the demanding tasks of a complex data analysis pipeline. knitr’s job is to communicate those expensive results after drake computes them. knitr / R Markdown reports are small pieces of an overarching drake pipeline. They should focus on communication, and they should do as little computation as possible.

To insert a knitr report in a drake pipeline, use the knitr_in() function inside your drake plan, and use loadd() and readd() to refer to targets in the report itself. See an example here.

drake is not a version control tool. However, it is fully compatible with git, svn, and similar software. In fact, it is good practice to use git alongside drake for reproducible workflows.

However, data poses a challenge. The datasets created by make() can get large and numerous, and it is not recommended to put the .drake/ cache or the .drake_history/ logs under version control. Instead, it is recommended to use a data storage solution such as DropBox or OSF.

drake does not track R packages or system dependencies for changes. Instead, it defers to tools like Docker, Singularity, renv, and packrat, which create self-contained portable environments to reproducibly isolate and ship data analysis projects. drake is fully compatible with these tools.

The workflowr package is a project manager that focuses on literate programming, sharing over the web, file organization, and version control. Its brand of reproducibility is all about transparency, communication, and discoverability. For an example of workflowr and drake working together, see this machine learning project by Patrick Schratz.

Special thanks to Jarad Niemi, my advisor from graduate school, for first introducing me to the idea of Makefiles for research. He originally set me down the path that led to drake.

Many thanks to Julia Lowndes, Ben Marwick, and Peter Slaughter for reviewing drake for rOpenSci, and to Maëlle Salmon for such active involvement as the editor. Thanks also to the following people for contributing early in development.

Credit for images is attributed here.